If you are looking for the Virtual Theater Festival, please click or visit baat.us/vtf 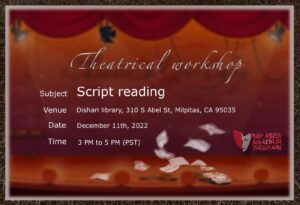 We closed the year with a theater workshop focused around Script reading. Two scripts were read and discussed, including one local playwrights: Mr. Don Ganguly and Mr. Swapan Bera. 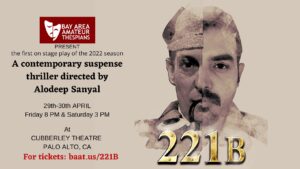 221B is a murder mystery, adapted from the original Bengali play written by Arindam Mukherjee in 2010 and staged in Kolkata with Debshankar Haldar in the lead role. The mystery unfolds in the house of the protagonist who is a world famous economist and an ardent fan of Sherlock Holmes. Join us to watch an original Bengali mystery play. 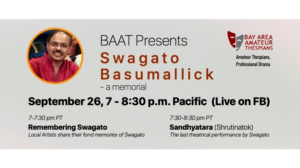 Swagato is a familiar name in the Bay Area especially if you like to watch or perform in live creative events like Theater, Music and Dance. We sadly lost Swagato in the battle of life a few months back.
BAAT is hosting an event to commemorate his contribution and celebrate his life and work. We will have a set of panelists, who are familiar faces in Bay Area performing arts scene, speaking about their personal experience working with Swagato.
Play in the Park
Language: Bengali
Play in the Park & Theater Workshop 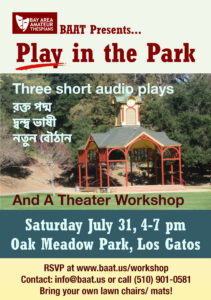 BAAT hosted a Shruti Naatak festival and a Theater Workshop, in the outdoor sunny gazebos of Oak Meadow park in Los Gatos.
We started off with three short (~20 min) audio plays in Bengali, with a vast variety of talent from the bay area: রক্ত পদ্ম, দ্বন্দ্ব ভাষী, নতুন বৌঠান. Afterwards, we had a theater workshop facilitated by the BAAT members, where people  got a chance to practice stagecraft.
2021
Language: Bengali
KE BABA, HAHALABA 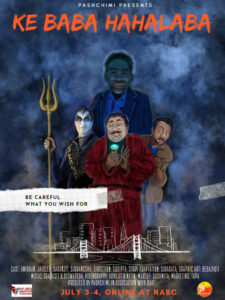 Sri Nrisingha Roychowdhury is the scion of an erstwhile Zamindar house of Bengal, currently settled in San Francisco. On the midnight of December 31, 2019, he consults a vagabond shaman and turns to the supernatural for get-rich-quick schemes. Come laugh with us as we conjure magic on screen, invite beings from other worlds, and peek into the future of the world with the short film, “Ke Baba, Hahalaba?”. As the famous saying goes, “Be careful what you wish for, because it might just come true”. 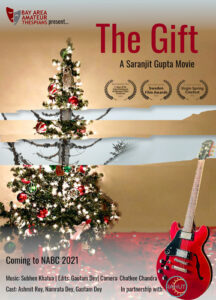 Drawing inspiration from O Henry’s ‘Gift of the Magi’ and Satyajit Ray’s ‘Two’, the short film tries to project alternate realities of Gift - the spirit of giving, pitted against commoditization of Gifts.
The story revolves around an NRI family in Bay-Area. In their regular lifestyle the parents usher multiple gifts for their only son, who has grown an apathy towards gifts. Gifting is a ritual they follow in a mechanical way - the count and price-tags matter. The overwhelming variety of gifts dwarfs the possibility of cherishing one prized possession..

In a COVID-stricken world where the pandemic has taken a toll on the finances of millions; imagine how the same family, presumably struggling to meet their ends, would approach an unforeseen Christmas Eve. Experience how even an inexpensive gift can outshine the costliest of them in the spirit of gifting.

We lost the great master, Soumitra Chattopadhyay, on November 15, 2020. To commemorate his life, BAAT organized an event called Soumitra Smarane last year. We met with fellow enthusiasts to discuss memories, anecdotes, and the impact this one man had on the collective Bengali consciousness. We heard stories from people who have met him throughout the different stages of his life, we heard poems written by and recited by him, and then we had a short Soumitra quiz. 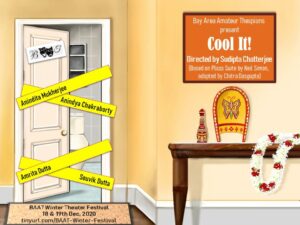 One of the many challenges of performing plays in a Zoom/quarantine world is to adapt everything to fit the screen and become a video conference / audio play. We challenged ourselves and introduced “Cool It”: a Bengali adaptation of Neil Simon’s Visitor from Forest Hills, and made four actors from three cities and two time zones appear on a screen as if they are in the same room. This hilarious play follows an acrimonious couple whose daughter has locked herself in a hotel bathroom on her wedding night, as the two of them try to figure out who is to blame for this misadventure. 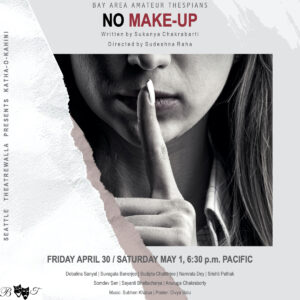 Written by Sukanya Chakravarty and directed by Sudeshna Raha this unique play was performed live on a “virtual stage” in an exploration of a “fourth” theatre form. It blended elements of cinematography with live theatre style acting, while being watched by a global audience through Zoom. No Makeup puts the spotlight on the plight of Geetanjali, a mother stuck in a violent situation at home, seeking help from Rohini, a family friend and a divorce lawyer. But is Geetanjali the only victim here? Well, you’ll just have to watch the play to know more! 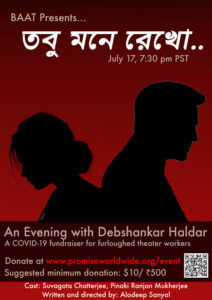 Written and directed by Alodeep Sanyal, this  play used the virtual theater medium to its advantage. A phone conversation between long lost college sweethearts brought the romantic notions of the love of youth face to face with the harsh realities of becoming adults in the world. The viewers got to see some innovative use of mirrors and soul-touching music in this production. 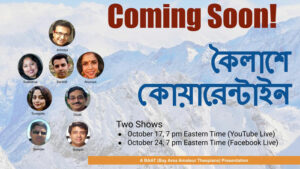 কৈলাশে কোয়ারেন্টাইন (Kailashe Quarantine). What happens this year when Coronavirus has thrown a wrench in the Durga Puja? How are the gods and goddesses of Mount Kailash dealing with the modern times and modern problems? Come watch this hilarious play unfold in front of the grand set of Mount Kailash - a hard biting rip roaring comedy! 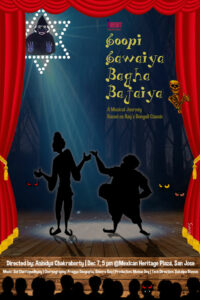 Gupi Gawayiya Bagha Bajaiya was a musical presented by the teens of the Bay Area. Inspired by Satyajit Ray's immortal creation Gupi Gayen Bagha Bayen, a film that almost all Bengalis and beyond have so fondly relished multiple times on silver screen, this presentation was our humble effort to pay tribute to this great filmmaker for his contribution to children's films. The playwright was adapted in English from the work of Satyajit Ray’s own grandfather Shri Upendrakishore Roy Chowdhuri, original lyrics in Hindi written by Nimish Singh.

This theatrical piece was produced under the banner of BASAFF, Bay Area South Indian Film Festival for their CineNext event - a Film festival for the children and young adults of the Bay area. Directed by Anindya Chakraborty, original musical score by Sid Chattapadhyay - embellished by the work of  two talented choreographers, Shuvra Ray and Pragya Dey, Set designed by Sukalpa Biswas, Produced by Mohua Dey and co-produced with Aparna Dasgupta of BASAFF. 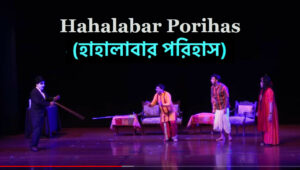 We have come across mystics of all kinds in India: from Tantriks to Kapaliks to the quirky village witch. "The Jest of Hahalaba" plays on the quintessential human weakness to turn to these mystics for a supernatural or quick-fix solution to life's problems. From a director's perspective, it is amazing how the possibilities of a physical comedy open up, as soon as you're given the liberty to conjure a magic trick, and invite beings from other worlds onto your stage. Come and laugh with us, at the true "jest" of Hahalaba. And as the famous quote says, ”Be careful what you wish for because you might just get it”. 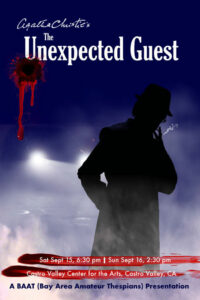 BAAT started their journey of quality theater productions with Agatha Christie’s mystery thriller “The Unexpected Guest”. It was an intense 1.5 hrs production of 2 shows in the weekend, with full stage setup, lights and music, captivating the audience with a thunderous applause when the show ended. If you want to relive that production watch